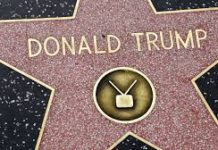 “What you have to understand about Trump, first of all, is that he’s a performance artist, not a politician,” explained filmmaker Michael Moore (one of the first public figures to predict Trump’s election).  In recent months, considerable attention has been given the President’s apparent distain of reality or what some nominally call “truth.” But maybe its time to look at Trump’s “creative” approach to factuality in a different way.  Say what you will about The Donald, his ability to get public attention is astonishing. And while some critics question the President’s grasp of “reality,” others see a calculated shrewdness in his behavior––an underlying strategy not unlike what Naomi Klein discussed in The Shock Doctrine.

Is this veteran huckster simply putting on an act?

After all, aren’t all politicians “performers” in some sense of the term? You would expect that in an age of media spectacle most Americans are accustomed to this idea. The problem is that many still yearn for authenticity in their leaders’ words and deeds. Hungering for a vision of a better world, voters will cast aside doubts about a candidate’s claims and promises––only to be disappointed when reality sets in. This partly explains why Americans have become cynical about democracy. One often hears laments for idealized past when “truth” prevailed, that it could be recognized it when it appeared, and that the concept informed America’s behavior in the world. In actuality, Americans (and their politicians) have always had a “creative” relationship with the truth. Might the President simply be taking this tradition to its logical end?

A discourse quietly has begun percolating in recent months, which places Trump’s antics in the realm of artistic expression. And if you think about it, this makes a lot of sense. Before the recent election cycle, Trump’s most visible role had been that of a media showman in various incarnations of his well-known Apprentice TV shows. His books The Art of the Deal (1987), The Art of Survival (1991), and The Art of the Comeback (1997) are peppered with references to his “creative” financing and bookkeeping. A quintessential proponent of creative capitalism, Trump wrote that “Deals are my art form. Other people paint beautifully on canvas or write wonderful poetry. I make deal’s, preferably big deals.”Art itself is a “con” to Trump, who once quipped that “successful painters are better salesmen and promoters than they are artists.”  The Trump family has made a fortune from the creative economy –– from Donald Trump’s own entertainment enterprises, to Melania Trump’s career as a fashion model, to Ivanka Trump’s clothing and accessory lines, to Donald Trump, Jr’s. real estate investments in New York’s artistic East Village. Recently, famed performance artist Karen Finley put the matter bluntly in stating that “Donald Trump owes all of his wealth to arts and culture.”

The Trump-as-performance-artist premise isn’t as far-fetched as it might sound. Entrepreneurial success often hinges on creative traits like imagination, novelty-seeking, risk taking, and “thinking outside the box.” Also, the President’s iconoclastic slash-and-burn assault on liberal sensibilities fits within certain well-established aesthetic traditions. Dada and Surrealist artists of the early-20th century delighted in upsetting bourgeois sensibilities. Often linked to anarchist movements of the time, Dadaist “anti-art” upended conventional logic, aesthetics, and morality to shake up a complacent society and open the way toward a better world. André Breton’s Surrealist manifesto of 1924 advocated “the absence of any control exercised by reason, exempt from any aesthetic or moral concern.” One outraged reviewer in American Art News called the movement “the most paralyzing and most destructive thing that has ever originated from the brain of man.”

Now obviously, America’s fearless leader might balk at these comparisons.  And keep in mind that early  Dada and Surrealism (as well as their 1960s revivals) patently opposed both capitalism and militarism. Yet while Trump’s brand of disruptive aesthetics lacks the utopianism of those movements, his antics indeed may have another precedent––in the proto-fascist Italian Futurist movement that emerged from Dada. In 1908, Filippo Tommaso Marinetti’s, “Futurist Manifesto” celebrated industry, speed, and technology with a rabid nationalism and a determined view of humanity’s triumph over nature. “They will crowd around us, panting with anguish and disappointment, and exasperated by our proud indefatigable courage, will hurl themselves forward to kill us, with all the more hatred as their hearts will be drunk with love and admiration for us,” Marinetti wrote. Rebelling against harmony and the niceties of “good taste,” the Futurists also valued intuition not unlike President Trump. And of course, the Futurist movement propelled the rise of Benito Mussolini––an authoritarian outsider whose populist appeal lay in his assault on establishment values.

Propaganda was a key tool of the Italian Fascist regime, as it also was in pre-World War II Germany. Mussolini reveled in pageantry, expansive rhetoric, and an image of infallibility.  The corporatist state was valorized over liberal democracy, with a heavy emphasis on military power. Mussolini repudiated immigrants and anything “foreign.”  And in yet another eerie parallel to Trump, “Il Duce” was portrayed as a workaholic insomniac who was infallible in his judgements. A popular slogan of the time proclaimed “Mussolini is always right.”  Journalistic accounts that contradicted the regime were condemned, with newspapers often confiscated.  New outlets approved by Il Duce largely ran stories about rampant crime and “monsters” loose on the streets. As a former news editor himself, Mussolini eventually established his own Ministry of Popular Culture to manage public opinion, much like the Third Reich’s Ministry of Public Enlightenment and Propaganda. Trump Chief Strategist Steve Bannon often has cited the Reich Ministry as a source of technique and inspiration.

While it is tempting to draw parallels between past authoritarian leaders and today’s President Trump, such comparisons aren’t entirely accurate and they risk trivializing the horrors of the World War II era. Trump is less a creature of fascist ideology than of business pragmatism. He really isn’t that much of a “conservative” either, as many republicans now grumble. For Trump the deal really is everything. And like any good dealmaker, Trump knows the value of putting the other side at a disadvantage. Posturing, intimidation, and deceit are the main tactics Trump has used against such hospitality giants as Hilton, Hyatt, and Holiday Inn. One key to Trump’s success lies in his skill in throwing opponents off balance while ignoring their arguments. According to Harvard University’s Program on Negotiating (PON), this can be a shrewd technique. In “Secrets of Successful Dealmaking,” PON experts wrote that strategic use of chaos and disruption allows “those who can adapt quickly to changing circumstances to gain an important edge on their competition.” In contrast, managers clinging to “rigid strategies risk being blind to unexpected perils – and to unforeseen opportunities, especially when engaging in integrative negotiation strategies.”The bigger and more complex the deal, the more useful chaos can be.”